What I Wish I'd Known About Nursing & Pumping

I'm not sure if it's just spring or that I'm at that optimal age for our generation between having completed grad school a few years back and so actually earning more than $50K per year, and still having the physiological capability to bear children, but whatever the cause - I know a LOT of pregnant women right now, and they all plan to work after giving birth. And as we say en espanol - ?como no?! The way the world is now the vast majority of families are going to have to engage both parents in out-of-home work. So, I interrupt our discussion about paid care leave to share with you what I've learned about nursing.

A lot of the soon-to-be-new-moms are, however, giving birth for the first time, and  a few have asked me about breastfeeding. Most people cannot believe I nursed full-time for a year and that my son didn't quit nursing until he was 17 months old while I also worked full-time and hour from home. (Yes, pat on the back.) Now, I'm not crazy, I'm just irrationally tenacious when I'm committed to something. I guess some people would say that's the same thing, but the silver lining is this - you only have to be crazy to figure this stuff out... a perfectly normal person can use all my tips and remain certifiably sane.

So, here's how you do it (partners, dads, and caretakers, it's good for you to know this stuff, too)... and I'm going to state both the obvious and not so obvious: 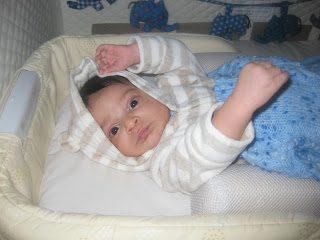 Dads, partners and babysitters, here's what you can do: 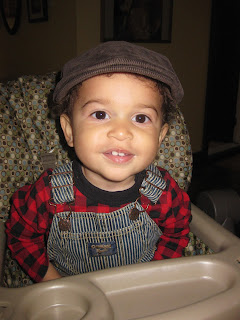 For all the new moms - LOVE you lots!! Congratulations on giving birth to your very own! If you have questions, leave a comment. If I cannot answer it - I'll find one for you before you go nuts between feedings!
And, if you have tips to add, please do so in the comments. Thank you and good luck to everyone!!
Posted by mariah at 24.3.13 No comments:

Email ThisBlogThis!Share to TwitterShare to FacebookShare to Pinterest
TIME OFF WITH BABY IV: Western Europe, in Her Infinite Wisdom

As we now consider the effects of paid parental leave policies studied in Time Off With Baby: The Case for Paid Leave Care, let's remind ourselves what the purposes of paid care leave are:
"The Primary motivations for providing rights to parental leave are to:

So, what are the policies in Europe and Canada and how do they affect children and families?
This is what paid care leave the world over looked like a month ago: 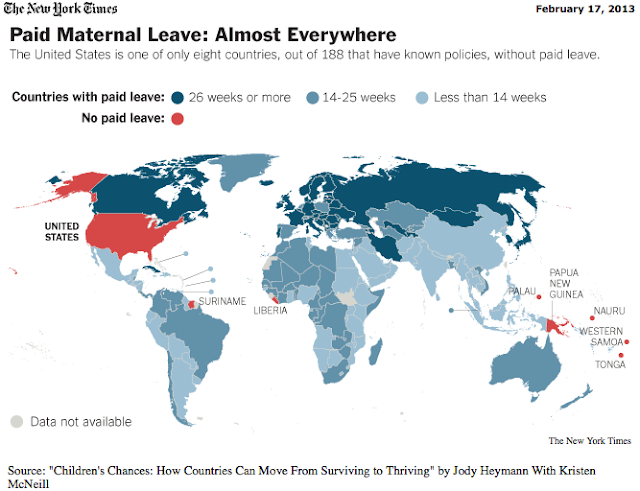 While I believe the U.S. can learn a lot from our brother and sister nations on Earth (and use a dose of healthy competition), I also know each nation has its own challenges, and the governmental policies of each nation reflect the culture of its peoples. So next week we'll take a closer look at our homeland through the policies of California answering what we tried and how it went down.

See you next week!


* For more on character development I recommend The Social Animal by David Brooks or The Soul's Code by James Hillman, not to mention the poetry of Joy Harjo.
Posted by mariah at 24.3.13 No comments:

After last week's poetic break from Time of with Baby: The Case for Paid Care Leave, I hope you're ready to sink your teeth into some real meat! We've talked about why parental leave for infants and babies is so important, for both families and society; what it means developmentally - emotionally and cognitively - for babies; and the societal economics in support of paid leave. Lets bite the bullet and deal with the primary enemy of paid care leave in the U.S.

Corporate lobbyists would have you believe the entire economic structure of this nation would fall under the burden of paid leave care costs. But, according to both California and our authors, Zigler, Muenchow, and Ruhm, things don't fall apart:

These findings paint a clear picture for me - everyone wins when families win. Which leads me to ask why so many in the United States are so fundamentally against paid care leave. Let's just try this out: is it ultimately not about our children, but about the mothers? 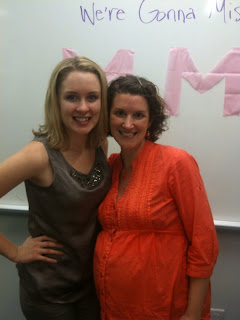 The firestorm that erupted in the 2012 campaign season brought to bear a few major women's issues:
While these examples barely scrape the surface of the "war on women" they do point specifically to our power as creators... And to our vulnerability as creators.

I've talked about this issue before: only women can bring children into this world, but in many societies for far too long this has made us beholden to men and vulnerable to their insecurities, frustrations and need for control - over us, and what we bring forth.

Paid care leave is not only a family issue, but a women's issue. And a men's issue. When we as a society make the choice to uphold the family, we will acknowledge the essential roles of each member of the family, as well as the strengths and frailties of each member. It is in that light that we can see what a family truly is, and that we are at our best as individuals, families, coworkers, and government protectors when we accept and build on both strength and vulnerability: for that duality is our humanity.

Please leave your comments below! We'd love to hear what YOU think!
Posted by mariah at 12.3.13 1 comment:

Many moons ago I also promised you poetry. So let me honor that promise tonight.
I hope you enjoy...


The whole world is asleep
In the room next to mine –
His little fists curled around
A sweaty receiving blanket.

Eyes closed so gently to the night
And day alike,
To my steps over the floor,
And the 30-somethings’ party across the backyard,
To military jets overhead,
And the prostitutes
Under our front steps,
Their johns all unzipped and unaware…

That above their heads
The peace of sleep is ever pervasive,
blessing us all.
Posted by mariah at 4.3.13 1 comment: