TIME OFF WITH BABY II: Babies

When we left off last week, I gave some dismal numbers that probably left you a bit irritated about the condition of parental support for early life childcare. But there was a silver lining: that if America were to support parents in taking extended (6 months) leave to be home with their infants, our society as a whole could see benefits that are valued at as much as $17 to $1 of investment by some world renowned economists.

That's all fine and well, but most of us don't ask the monetary value of nursing our baby 8 times a day, or spending 20 minutes a day stacking blocks, knocking them over and laughing about it for a week. So, let's talk in human terms. What does it mean for parents to be home caring for their infant? and what does it mean for parents to be separated from their baby because they have to work?
But it all boils down to one thing for me: that those irrationally crazy-about-the-baby parents should be able to be with their child at this critical time in their child's life if they chose. And society should help them do it. Our society should help us do it. 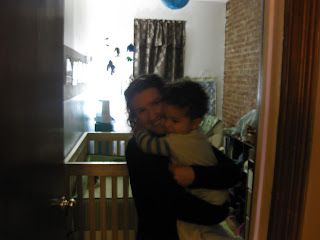 Please leave your comments, thoughts, concerns and even additional research if you've got it below. Let's talk about what all of this means, for us, today, as moms and dads in the real world.

Research above is reported from  Time Off With Baby: The Case for Paid Care Leave by Edward Zigler, Susan Muenchow and Christopher J. Ruhm, 2012.

TIME OFF WITH BABY I: Economics

So now that both Howard Dean and President Barack Obama are talking, will the nation start listening?

While Obama took the "attainable goals" (please don't laugh, these are our kids, right?) approach, Howard Dean, followed his typical "hold no prisoners" route. And God bless him, because I'm not likely to drop my zero-to-three advocacy, and Lord knows we could use a very public defender on our side on this debate, yes, even if it's due to make us all laugh (these are our kids, right?).

So, now that the conversation has been publicly reopened on early care by Mr. Dean, and pre-school by Mr. President, let me give you some ammunition. I accepted it as my obligation to read Time Off with Baby: The Case for Paid Care Leave (thank you, Tris) in November after writing my last post. But let me tell you this is one motha' of a text, and it took me a while to distill for you only the most exciting, gut-wrenching and salient points, so that when we do make our elevator speeches, by golly, we leave our listeners downright nauseated. Are you with me!?

I'll try to convey what I've learned in a few posts so we can both maintain sanity. Since it's what America knows best (I have a pet theory that slavery sowed the seed of capitalism), let's put our money where our mouths are. For today, we'll talk economics, because if we don't start there, as you know, in the U S of A, we will never get anywhere. (When you talk to the Devil use his language.)


I'm going to ruin the ending of the book for you, just so we're on the same page here (ba da bum bum bum). In California parents are already provided with a shared approximately 50% pay for 6 months of early child care leave. And after doing the math, spending some serious time with babies and mothers, then dropping in on the work world, these economists are recommending a federal program that offers California's benefits in all 50 states. Not so much because that's what's best for the family or baby but because of everything out there which would probably be better (in Europe some moms get paid for up to 2 years), this is a compromise that is affordable for our nation as she stands now, and gives families the best start within the limitations we face through a policy that we might actually pass. Attainable goals, people. The authors wanted to be taken seriously. 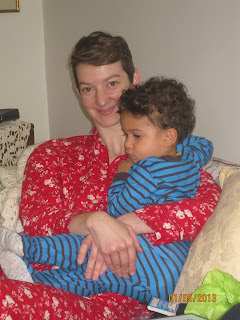 This is a picture of my son with his Aunt. Why? Because my son is one of those lucky children who is loved and cared for by the whole village. Some children are not that fortunate. And while we may not be able to get everyone involved in taking care of every child, we can all be involved in supporting at least the two people who matter most: mama and daddy, so that they can give everything they have to raising their child.

Not sure moms and dads matter so much?? - check in with me next week.

And let's talk! Add your comments and questions and thoughts below!
Posted by mariah at 17.2.13 1 comment: