Agency... Found in a Lock

While on radioactive lock-down a couple weeks ago (part deux of my cancer treatment, and the scarier part) I had a lot of time to myself. I admit, I watched a lot of The Mentalist and read a lot of Game of Thrones, book IV. But one night, I also fell into the 2011 film, Extremely Loud & Incredibly Close. If you haven't seen it, an approximately ten-year old boy, Oskar, loses his father on September 11th in the WTC. He tells us that he was tested for Asberger's, but "diagnostics were inconclusive." He is noticeably distant from his mother, but close to his grandmother, who takes a 'boarder'. Oskar discovers a key in the top of his father's closet one year after his death, and decides this key was meant for him to find, and for which he is determined to locate the key it unlocks, discovering a secret his father means for him to find.

There are many things Oskar finds, including the truth about 'the boarder' and the person who needs the key most. Oskar, being a man of select and distinct intellect and strategy, plots his way through the five boroughs looking for the person who holds the lock. He meets over a hundred people over several months, walking from location to location asking anyone by the last name of "Black" if they knew his father, Thomas Schell, and if they have the lock. Obvious significance of the names aside, Oskar is determined, methodic and secretive. Until he meets his grandmother's boarder, an elderly man who doesn't speak; he has not lost his voice, just his will to use it. Oskar wants to know his story, and pours out his own to the man at 3 a.m. The boarder asks Oskar if he would like a companion on his search.

Oskar has rules, many of them, and a strict schedule. He's afraid of the MTA, so walks; he is goal-oriented so figures to hit so many houses in so much time, insisting on at least 20 people per Saturday. The boarder agrees to everything, but Oskar makes some allowances: the boarder cannot walk that much or that fast; they take the train. The boarder needs to sit down and eat, and might need more than 6 minutes to consume his hotdog. So be it. 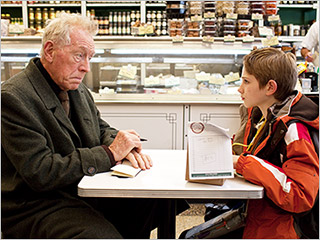 The moment of truth comes on dry-run when Oskar insists on visiting a river home in the Rockaways alone, and looks back to see that the boarder has left him. Oskar finds him in a bar. The boarder is his grandfather, and Oskar admits that he would like the man to come with him from now on.

This 9/11 film reminded me of something we're allowed to forget in this society because we so rarely see it: that children and elders have an understanding. Perhaps they're bonded because they're free from the responsibilities of supporting themselves or their families (hopefully) and that allows both children and elders to see the world differently, traverse it differently. Perhaps it's that neither is prepared- physically, emotionally, or spiritually- to move at the rate most adults are expected to perform in the 21st century. Perhaps there's also a layer of being closer to the spiritual world than we "adults" are. Children have just emerged from it; elders are on their way back. But perhaps there's also an unfortunate commonality, too: that because they don't "work" they're not treated as having as much to "contribute" to society, and therefore not seen to be legitimate individuals - the way adults are.

From moment to moment, watching the exchange between this old man who is living out his last days, and his every regret, in secrecy while giving Oskar the agency he deserves, as Oskar discovers all the secrets and exposes them one-by-one, myself unable to care for my child, and in fact, being cared-for a great deal by my husband's parents, I realized how crucial it is to respect our children as real-live people. Yes, I ask my son if he wants cereal for breakfast, and if he says "no" I offer oatmeal, but a choice like that is an illusion of agency. Real agency is respecting him when he says "no" to a hug, and when he wants to walk instead of ride in the stroller, and backing off so he can engage in play his own way.

My son will be two years old just after Thanksgiving, so we've been dealing with the "terrible twos" for almost a year now, and I think it's high time we stopped allowing it to be called the "terrible twos". Don't we all want to accomplish the one thing we're on earth to do - to become what we are meant to be? Our children have so little say in so very much, while we make all the decisions. Now, I'm not pulling back on the routines, naptime, and insisting that my child eat three heads of broccoli before he can have a damn cookie, but I am saying that waking up each morning with an eye to what our child intends, his goals, his desires, his obsessions and his instants of insistence might help us see just a bit better into his soul, allowing us to let it show itself, and every day become more what our child is meant to be. 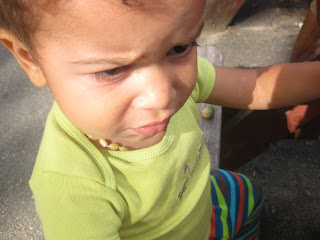 This is where I invite you to comment below. What do you do to respect your child's agency? What have your experiences been with raising toddlers? What do you think society could do to respect children as individuals more, and validate their needs and desires while giving them structure and security? Have you seen this in another society? What did it look like?
Posted by mariah at 30.10.12