the Mamas annnnnd the Papas

Four weeks ago I optimistically told you we would talk about the papas "next week." What happened? why is it so hard to talk about what Daddies do?

On Tuesday I worked from home, and when my son and I arrived at the playground just before 9 am, there were two other toddlers there. With their papas. By 9:30 there were seven kids on the rainy blacktop: all of them except mine with their daddies. The thing is I was home that day because my husband had a meeting he couldn't reschedule. Every other Tuesday he's the one with our toddler at the playground, with all those other daddies.

And he has been since I went back to work, at which point my two best friends in New York also had infants. And at that time, all three moms returned to work while the dads did some or all of the 9-5x5.

So the economy sucks and we're getting creative, but maybe that is changing the daddies. Before we get into the post-partum stuff let me relay a few things I've learned from science:
They say the mother's role in childrearing is to be nurturing, caring, respond to the child's needs, and teach trust, reliance, relationship and communication skills, and encourage the child in all things. The mama looks inward - creating a family life, a nest, and looking to the child's innermost needs. A father's role is to push baby out of the nest, to show her the world, to encourage her to go out and see it, and do it, and be it. He teaches her confidence, pride, work ethic and perseverance. Papa is focused on the outside world, and helps the child to leave the home and discover the universe.

But I've definitely noticed that the daddies we meet, like my son's father, are nurturing and emotionally in tune with their children. In some ways they do respond totally differently to situations than I do. For example, when my son wiped his arm over the picnic table scattering the acorns a three-year-old carefully gathered, I went over and said, "Mihijo, we don't do this, he's playing with these nuts - let's put them back." When my son's best friend did the same thing minutes later, her daddy called out, "oh, man, there they goooo!" a big laugh resounding over the chaos. Honestly, I thought it was awesome.
I was teaching my child to pay attention to others' needs and wants, and to be empathetic to others. My friend was teaching the kids that shit happens, and that can be laughable (the nut-gatherer was, by the way, no where in sight for either incident). Both are good lessons.

This moment crystalized for me one difference between mommas and daddies - yes, we're teaching different stuff, but I've seen that daddy hug and love and comfort his daughter in all the same ways I hug and comfort and love my son.

What occurs to me is this - I do believe that daddies are spending a lot more time in the 21st century with their young children than they did in the 20th century - at least among western civilizations. And the papas I know are much more emotionally in tune with their children than the fathers of my generation.

I see a unique opportunity here for our men to learn a new emotional intelligence (E.I.). Just as I've said my child made me a mother, I believe our children teach their fathers to be fathers. And I see the dads around us learning to be the kinds of fathers we would have wanted. I don't think past generations put a lot of stock in men having emotional intelligence - that is paying attention to their and others' emotions, being sensitive to them, and offering care for those emotional needs and the people who have them. I don't think society in general has placed much value on emotional intelligence. There's a reason why it is women who dominated the lines of work that require care and E.I.: teaching, nursing, child-rearing, and management positions. Because we have learned E.I. over millennia of taking care of small children, older children, the elders, and managing households chock full of emotions coming from every direction. Note that it was those lines of work that pay the lowest wages (see previous posts for data links).

As the work world learns that we have to find a way to reconfigure work to allow both [working] parents to care for their children, more men are carrying a part of the load, and learning a new kind of sensitivity. There is a great opportunity here - one where men can take what they are now learning as the fathers of small children (who have perhaps the highest emotional needs), back into the larger world - and give new authority to valuing emotional intelligence as one we all need, one that is essential for working together and working together better, not to mention heightening our awareness of the value in all things - from the human soul, to four-leggeds, winged-beings, and swimming things, and the very earth we stand upon.

Maybe feminism's cosmic role wasn't just to let women out of their Leave-it-to-Beaver shackles but also to release men from the just-as-restrictive life of Mary Poppins' nemesis, Mr. Banks. Just as we see how our bodies work together not only to create a child but to create the relationship that will sustain a child after birth, we can see that it's both men and women who nurture our children.

Papas, you have an opportunity here - to go back into the world and add the authority of your voices to those of women everywhere who know the value of understanding emotions, empathizing with others, and responding to emotional needs. Human beings are emotional creatures, and that is part of what gives us the ability to bond, to serve one another, to provide for each other what, individually, we can never do for ourselves. Some would say it's what allows us to touch the sublime. Women can't change society alone. As we created life together, we can elevate it, only together. 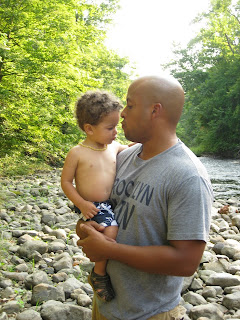 Dear Readers,
I'm honored that you take the time to read what I write for you. Thank you for this and for caring about the issues I discuss in my posts. I also invite you to comment on what you read - share your stories, comments, thoughts, statistics or meditations. I would love for this blog to be come a forum where we can all get together to share and change the world.
Sincerely yours, Mariah
Posted by mariah at 13.10.12