Sometimes something so horrific is said or done that we have to take time out to recognize it for what it is and does, but also for what it conceals and protects. Often that thing concealed and protected very much needs to be revealed and dismantled.

Rep. Todd Akin (Missouri): "If it's a legitimate rape, the female body has ways to try to shut that whole thing down."

While the majority of commentary and criticism about this abominable statement centers on its ridiculous and unfounded concept of the female body's capabilities, there is a glaring double meaning to the phrase "legitimate rape" - and that is this: that sometimes it's ok to rape a woman. Sometimes it's a legitimate act.
[A legitimate child is a confirmed member of society, well and good; an illegitimate child is one born of an improper act, an unsanctified union.]

I'm going to borrow from Rachel Maddow's genius criticism of Akin's inane comment and the tradition from whence it came. On August 20th, she reminded us that ideas as stupid as this rise up every so often in the speaker's desire to find loop holes that allow him to feel more justified in putting forth legislation that is unjustifiable. If he can find a way to make the woman the guilty party - manipulative, conniving, lying - then we can claim that it's really ok not to allow abortion exceptions for rape and incest "victims". After all, they're really the perpetrators in these cases, right? That is: we don't have to protect women.

When a man is capable of putting the words 'legitimate' and 'rape' together, my sense is that his underlying beliefs about women are so distorted by his power hunger and arrogance that he actually believes there are times it is ok to force himself on a woman and her body with total disregard for her as a human being with a mind, soul, heart and body of her own that deserve respect and, in fact, deference. And if that speaker is so divorced from the meaning of his words that he could let slip a phrase with such a glaring double meaning without realizing it, he should not be in public office, and perhaps be barred from using the English language.

And now let me quote from an equally powerful speaker, Secretary of State Hillary Clinton: 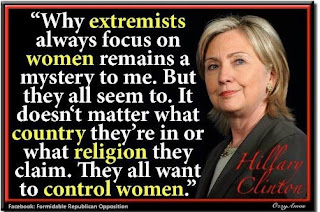 So, here's my chance to give something back to us as women. There's another story in our collective unconscious that can be read at least a few ways: the story of Adam and Eve. Western culture tends to focus on one reading of the "creation of man": Eve bit the apple, she did not resist temptation, and, in fact, tempted Adam, who was strong and resisted. She is both weak and manipulative while Adam is strong and forthright. Here's what I've never heard from anyone or read in any text: the apple came from the tree of knowledge. And the forbidden fruit held wisdom. When Eve bit the apple she gained the wisdom it held. (I personally eat an apple a day.) Adam did not.

I'm sure many men would like us to forget that we possess a wisdom to which they don't have access. Maybe it was from the apple, or maybe it was from our "punishment" that we gained that wisdom. Maybe it is in the stress and ardor of carrying a child, the pain and labor of giving birth to the child, and the infinite love and care we give to our children once they come into this world that we gain our wisdom - one men cannot experience. What is that wisdom?

Perhaps it is in part empathy, perhaps it is understanding through the pain we all experience, with our without pregnancy, each month, - a way to understand anyone's pain anywhere. Because we are reminded with each moon what it feels like to be in pain, to suffer, to bleed. For this reason, maybe we empathize better with the Sudanese. Perhaps it is the compassion that comes with empathy - making us more likely to startle when we see someone fall, cry when we read something heartbreaking. Perhaps it comes with the dark emotional places we go with our "mood swings" and crying jags. Perhaps in those dark places we see more of human experience, and are more willing to feel what others feel: drowning polar bears watching the sun fall away. Maybe in that darkness and pain we experience a more complex life - one that lets light come through the darkness, one that sees shades of grey and even a full prism of color, and the beauty each color lends the next. Perhaps it is a woman's intuition that knows why her infant is crying when the child has no other way to communicate but with tears. Maybe part of the wisdom we inherited from Eve is that as creators we understand creation. We understand that if nothing else is sacred, creation is. If nothing else deserves our protection, life does. Trees, streams, Pe' Sla, toads in Brazil, and the people of the Andes.

Maybe there are men out there who are afraid of, in poet Wyatt Prunty's words, "what women know, what men believe." Because there is an insinuation there that men can 'only' believe. We "just know." Trust what you know: it might save the world.

FYI: According to the NIH, 5% of rape victims of child-bearing age get pregnant. "A total 32.4% of these victims did not discover they were pregnant until they had already entered the second trimester; 32.2% opted to keep the infant whereas 50% underwent abortion and 5.9% placed the infant for adoption; an additional 11.8% had spontaneous abortion."
Posted by mariah at 29.8.12