Love Was at Its Center

I knew what I wanted from a very early age, and love was at its center.

By the time I was pregnant, though, I wasn't sure whether I was the kind of woman who could be home with a child every day all day, day after day. Then my son was born, and for the first few weeks I didn't know what to do with myself... turn on the TV? Read a book? Do laundry or get on facebook, while this little pumpkin took his three hour naps? And then, suddenly, I just started finding stuff to do. I just wasn't a woman to sit still. I created little goals and went for them. By the halfway point in my maternity leave, I was trying to find any way not to go back to work - but it wasn't the little goals - it was my son.

I thought about taking another baby into my house to make money, working from home like those wacky e-mails say you can [and make a quarter of a million dollars a month!]. But, frankly, I didn't want to give any of the attention I had for my son to another child - or to the worldwide web. When I did start back, I cried every day for a week. The next week was easier. The third week was worse than the first - because I suddenly realized, this is how it would be. This wasn't a trial period, it was for real. Even through that time my husband and I thought I could go down to part-time or maybe he would even make enough for me to quit at some point.

Well, my little pumpkin has broken free of his vines and is a walking-talking 19 month old wildling, and I'm still working. Full time with an hour commute both ways. And in this amount of time, between pumping (4 x a day - we'll get to that), schlepping my son through the NYC MTA six times a week, making his food myself, hand washing every poopy sleep sack, attempting to sleep myself, and lose the baby-weight (you gotta get back into those office pants, right) not to mention maintain a single relationship outside of my mothering one, I've gotten pretty philosophical about this life, about my life, about my son's life, about work, about America. About how America treats mothers, and families, and, for Pete's sake, infants! 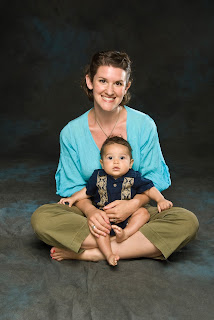 It's not just about maternity leave - though that's the motherlode, isn't it - it's also about paternity leave, and it's about teaching children to read when they're 3, and raising them on Gameboys, and working 55 hours a week, yes, some of that at home after you've put your children to bed, and you should probably be putting yourself to bed. There's a system at work, and we're allowing it to systematize everything in our lives. And I don't think the human being is at the center of that system because it's an inhumane system.
I don't think love is at the center of the system running our lives.

This is what I'd like to talk about with you: making a love that cares for living things the center of our lives and using it to change the system.
Posted by mariah at 7.7.12